The Beavers spent 2 hours following instruction to explore a small part of Bushy Park.  They all earned their Explore Activity Badge and gained an extra Hike Away

Making scones in a field!

A busy Beaver Fun Day, we had a great time with only a little rain.  The children who stayed on to the Sleepover were brilliant and slept all night through.

We had an absolutely amazing weekend! The Beavers behaved brilliantly and made the best of their slightly damp day in Brighton and then returned to the Church Hall for a Sleepover.

More photos can be found at:

This year has been as busy and exciting as usual – for both the children and the adults!  I was appointed as one of the 3 Safeguarding Awareness Co-ordinators for Greater London South West and this has resulted in my delivering safeguarding training across the county, giving me the opportunity to meet a wide variety of other leaders and visit far flung parts of the county!

In December Sarah Waine stepped down as Assistant Beaver Leader having done it on a ‘temporary basis’ for 10 years!  I would like to express my thanks to her for all her help in that time.  I was delighted to welcome Sally Cooke-Welshman as Assistant Leader in January – she is already proving to be a great asset to the team.  My thanks, as ever, go to Shelley Larsson – she has been helping out at Beavers for more years than she likes to remember!  We are now able to have really effective planning meetings and share the workload out! Since January we have also been really happy to have Ned back to help whilst he is doing his Duke of Edinburgh’s Silver Award.

This year has seen most of the Beavers earn their Emergency Aid Stage 1 badge.  As part of this we were very fortunate to be able to visit the Hazard House at Twickenham Fire Station, a great experience, where the children spotted dangers around the house and were able to call the fire brigade on a special telephone as well as having a good look at the Fire Engine and those who went on the Saturday morning looked around the Fire Station too.

We also worked on the Faith badge, including taking over the majority of the Family Service at All Saints in November.  The children acted as sidesmen, wrote and read the prayers, told the story of the seeds, took the collection and cleared up the church afterwards – and 16 of the Beavers gained their badge.

We organised activities, including a treasure hunt for Red Nose Day and raised just over £300 – a brilliant effort .

We started this year following the ‘Join-In Jamboree’ programme to give the children a taste of the World Scout Jamboree inSwedenthis year.  More recently we have been concentrating on the Outdoor Challenge badge, including making edible camp-fires and were fortunate to have some of the scouts come down and teach the Beavers to try some knots.

Once again we took 18 Beavers to Phasels Wood for an activity day, where they all enjoyed the climbing, go-karts, cresta run, aeroball and adventure trail as well as being able to earn their Explore badge.

As ever, we took part in all the activities which were offered by the District, including the District New Year Party, the Fun Day in September when 16 Beavers too part and 2 of them stayed overnight for the Sleepover, the District Safety badge event (which involved the children in activities the police, members of the RNLI , first aid and air safety) and the St. George’s Day Parade which this year took place at Chestnut Sunday in Bushy Park.

Nearly every Beavers has gained the Chief Scout Bronze Award before moving on to Cubs. The reason a few children haven’t is because they have missed a meeting or two where a particular activity was taking place, as some activities are very hard to repeat as they involve outside agencies.

During the year we twice provided the opportunity for beavers from our own and neighbouring colonies to be tested on a variety of activity badges which they had worked for at home.  This seems to be a very popular event.

I have been really pleased to have the help of a number of parents on an occasional basis at meetings which enables me to run a greater number of activities for children.  This year we have had help at nearly every meeting and I really hope this continues. If one parent from each family could come just twice a year it would mean that all meetings would be covered. The rota for the next term are on the wall for you to sign!

Our colony is full and we have a waiting list of 6 Beavers who could come in September if we had spaces.

With plans already well in hand for activities next term it looks like being another busy and fun-filled year.

The Spring Term has now finished for Beavers.  We will meet again on Friday May 6th.  Those who had booked to take part in the Badge Morning should all have received details of the times of their badge session(s).  If you need any further details please contact Rikki.

Well done to all the Beavers who took part in our Red Nose Day Treasure Hunt and ‘Wear Red’ afternoon.  The grand total raised was £290.  A fantastic amount 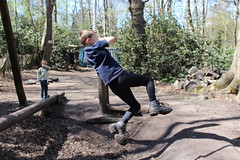 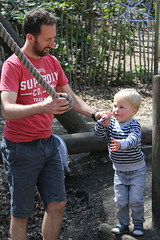 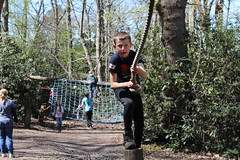